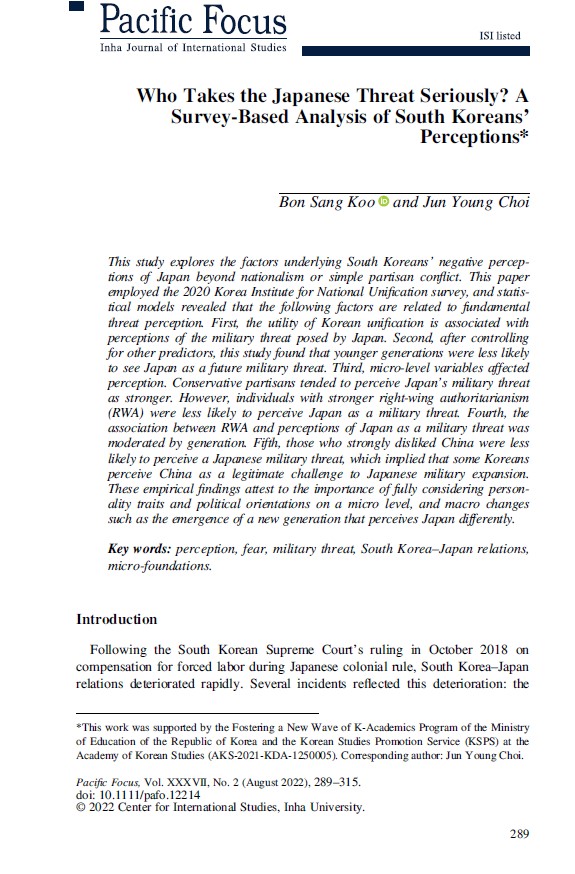 This study explores the factors underlying South Koreans’ negative perceptions of Japan beyond nationalism or simple partisan conflict. This paper employed the 2020 Korea Institute for National Unification survey, and statistical models revealed that the following factors are related to fundamental threat perception. First, the utility of Korean unification is associated with perceptions of the military threat posed by Japan. Second, after controlling for other predictors, this study found that younger generations were less likely to see Japan as a future military threat. Third, micro-level variables affected perception. Conservative partisans tended to perceive Japan’s military threat as stronger. Furthermore, individuals with stronger right-wing authoritarianism (RWA) were less likely to perceive Japan as a military threat. Fourth, the association between RWA and perceptions of Japan as a military threat was moderated by generation. Fifth, those who strongly disliked China were less likely to perceive a Japanese military threat, which implied that some Koreans perceive China as a legitimate challenge to Japanese military expansion. These empirical findings attest to the importance of fully considering personality traits and political orientations on a micro level, and macro changes such as the emergence of a new generation that perceives Japan differently.